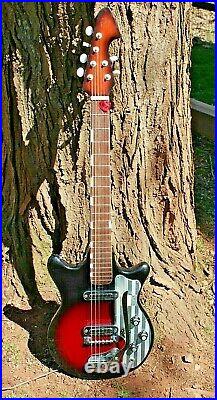 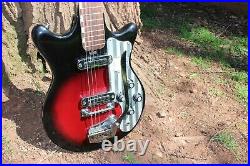 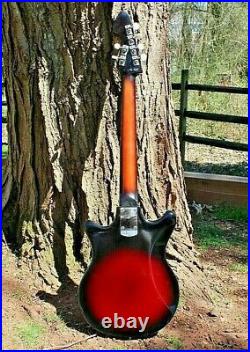 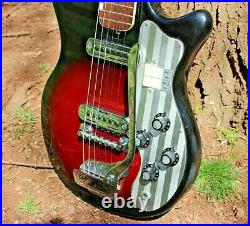 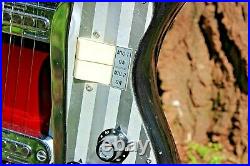 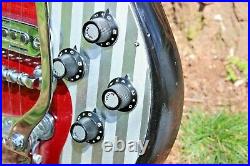 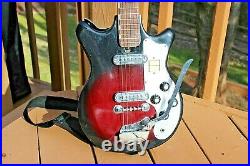 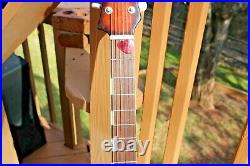 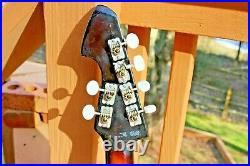 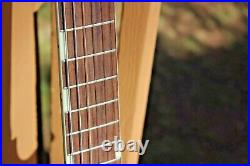 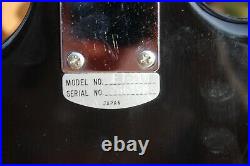 Very RETRO 1960's Japanese Electric Guitar. Cool edge fret markers, striped metal pick guard, tremolo bar, very cool rocker switch pickups, made in Japan in the 1960's. 2 rocker switches are a bit scratchy and easy to hit when you are playing but both pickups work fine. Each of the two pickups has six small round magnets and both are adjustable for height with a straight blade screw driver.

The tremolo arm is very cool and so shiny it may be after market. The bridge is held down by the strings and has a round knurled disc on each end that can be turned to raise and lower it.

The strings each have a grooved wheel to rest upon on the bridge that can be rotated on the threaded bridge rod to move each left or right to suit your individual preference. Original open tuners are four on bass side, two on the lighter string side, with plastic buttons. They work fine but doesn't take much to change tune, the D string button is more square than the other 5 which are more oval in shape, it looks similar to the other five but was probably replaced at some point. Fingerboard is in great shape, nice grain wood recently oiled, with those cool plastic.

On the edge fret markers, two for twelfth fret. Frets are shiny brass color, recessed from the fingerboard edge so they don't slice your hand and only the first fret is worn a bit. The round Teisco "25 cent coin size" logo and "Made in Japan" sticker on back of head stock are both missing but you can see marks where they were.

Body and neck shine and have a minimum of nicks and dings, you have to look for them. Head stock is not dinged up like you usually see. The Teisco ET-201 appears to be from the mid to late 1960's and is rather rare. Except for a different Teisco logo and a cruder tremolo cover, it is very similar in features to the earlier Teisco MJ-2L model from the early 1960's, also fairly rare, which I believe the ET-201 replaced. I couldn't find too many photos of either online. There are some photos of the ET-200 which has all the same features as the ET-201 but a more crudely made bridge - I guess the ET-201 was a bit higher end with the better, much more adjustable, bridge - a bridge you can adjust for string height and string spacing makes an electric guitar much easier to play. Teisco was a Japanese budget brand that produced guitars starting in the late 1940's. By the early 1960's, Teisco guitars became increasingly unique with a number of original shapes and designs being produced. Those imported to the United States were branded as Teisco Del Rey starting in 1965. Collector interest in Teisco and other budget import brands has increased in the past several years.

Are notoriously difficult to date and identify as no comprehensive records were kept during production. The ET-201 was a two pick-up version of an earlier design. The item "Vintage Teisco ET-201 Japanese Electric Guitar Works & Sounds Great" is in sale since Tuesday, March 30, 2021. This item is in the category "Musical Instruments & Gear\Guitars & Basses\Electric Guitars".